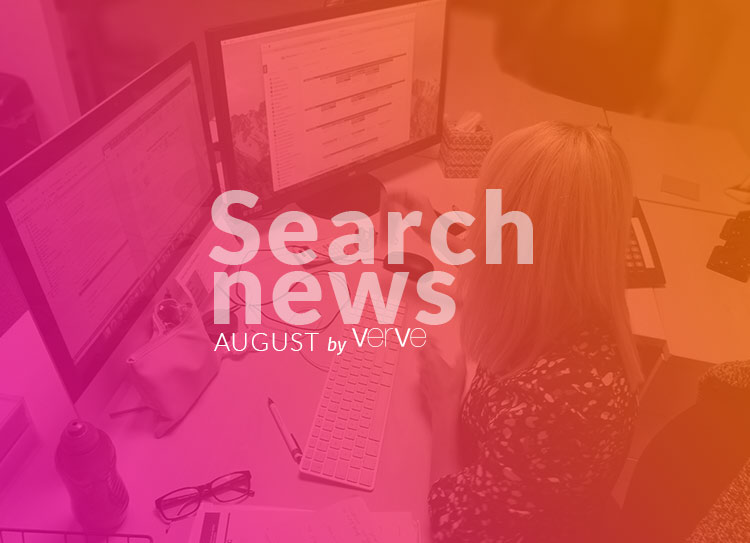 August has been a quiet month in the world of search! This might be due people focusing on the latest update to Google’s core google algorithm – more about this later. We have a few changes, a few rumours and a few light hearted things to talk about… So let’s dive in!

People always take a big intake of breath upon hearing there is a change to Google’s algorithm.

Google has confirmed that this month they have rolled out an update to their search algorithm, Google’s algorithm updates usually take anywhere from a few weeks to a month to fully roll out in the search results.

If you are concerned about any losses or gains in rankings in the search results, you should avoid any knee-jerk reactions too quickly make changes until the rollout is complete.

It isn’t unusual to see some sites fluctuate while an update is rolling out, and see the site end up back close to where it started when an update has finished rolling out.

I’m sure we will be talking about this next month…

Google announced it will soon be adding a separate line within Google Analytics (GA) to show traffic from Image searches. As a result, you might notice a drop in referral data, that’s because traffic from image search will be reclassified as coming from ‘google images instead.’

Google recently confirmed that there is no adverse effect if you use a single image multiple time throughout your site! Apart from being really boring! Still nice of Google to clear this one up.

In Googles latest search blog they released data about image searches! saying on average 63% of these searches turn into website traffic. This is mainly eCommerce traffic for people looking for products who prefer a visual reference than doing website searches. I was surprised when I read how high image search was as I see a lot of website images are not fully optimised. So If you have an image heavy website I recommend you run an image audit on your site as soon as you can to check your images are properly optimised, If you have concerns get in touch with me here at Verve and I’ll run a quick audit for you.

In a recent online poll, out of the four main channels for click throughs to your website are still Organic SEO, Pay Per Click, Social media and Direct email campaigns. Stats percentages may vary but the results order seems very content across all sectors:

Organic search is still the number one digital channel that will bring your site the highest amount of traffic, this longer resulting channel, is still the most effective and most complex of the four.

Pay Per Click is a lot more of a reactive channel, which is highly measurable, easy to control and results driven. On the face of it, PPC will cost more up front and the results will be quicker, but not long lasting!

Social media 7% – 18% per cent depending on your sector

Social media can vary but on average social media is considered to be the 3rd most effective channel for traffic. If you have a good strategy and the right resources social media is a great way to connect and engage.

Last but by no means least is the traditional direct email channel, if you spend time creating newsworthy content and you spend time building an effective mailing list, this channel is still a major player.

As we all know mapping services are a great source of information! whether you are looking for driver instructions, or just going for a walk! But also increasingly maps are becoming part of our everyday life, as they are giving us much more detail about not only how to get somewhere but also details about your destination once you do.

With the recent updates to Google my business (Maps), Bing and Apple-maps you can now give these mapping services so much detail about your business and this information will often be the first impression of your business.

Remember if you choose to ignore updating your details and not to use these new features, it will look like your business is not kept up to date and you might fall behind your competitors. So I highly recommend you are checking you are all up to date, and you have the true representation of your business on all these mapping services – Google, Bing & Apple Maps (Yelp)

Google has been spotted testing a new design for desktop search results, which features a sticky header and a rounded search bar.

(the image was taken from the Search Engine Journal )

From what is pictured in the screenshots, the most noticeable changes I see are:

The sharp corners of the search bar have been rounded out. Google has been big into rounded corners lately, and this is the latest example. The “see results about” box is rounder too, but the “top stories” box is not.

Google’s logo is noticeably smaller in the new design. Perhaps because it fits better with the new search bar!

I like the idea of a sticky navigation bar, everyone hates scrolling back-up! So it would be nice to have the navigation bar always useable.

Our favourite Doodle this month celebrates the 187th birthday of a great English sportsman who set down the rules for a game which is now played around the world!

Yes… the late great Ebenezer Cobb Morley who was born in East Riding of Yorkshire, England in 1831. Morley who was regarded as the father of the Football Association (FA), which is still the governing body for football in England today.
Happy Birthday Ebenezer from every Salopian football supporter for giving us the great game….Salllop!

Next month we should see a bit more of the fall out from Google’s Search Algorithm Update! if you have any concerns get in touch!